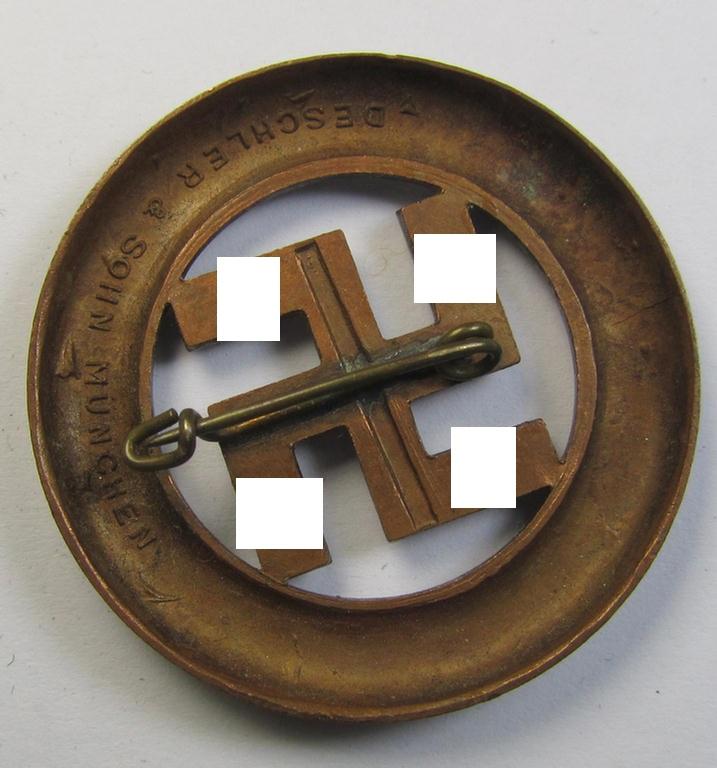 This is a truly attractive - and very detailed and/or pronounced! - N.S.D.A.P.-related so-called: 'Tagungs- o. Veranstaltungsabzeichen' (often also referred to as: 'Gau München'-honorary-badge) being a typical maker- (ie. 'Deschler - München'-) marked and/or copper-toneed example, showing a (detailed and pronounced) 'swastika'-device coupled with the text: 'Und Ihr habt doch gesiegt! - 1933' and that comes in an overall very nice- (albeit I deem issued- ie. moderately worn-), condition. The attractive and circular-shaped piece is executed in reddish-brown-toned- and (I deem) copper-based metal: it shows some minimal wear and/or moderate age but has - I deem - never been cleaned nor polished (it is still a bit dirty but has maintained a nice, minimally tarnished-, age-patina). The badge - which was issued- ie. awarded to commemorate the 10-years anniversary of the N.S.D.A.P. in München - comes mounted on its functional (and unaltered!) pin-/catch set-up and shows some minimal age ie. staining (as can be seen on the pictures). Simply a great occasion to acquire an N.S.D.A.P.-related, so-called: 'Tagungs- o. Veranstaltungsabzeichen' for an interesting and justified price!