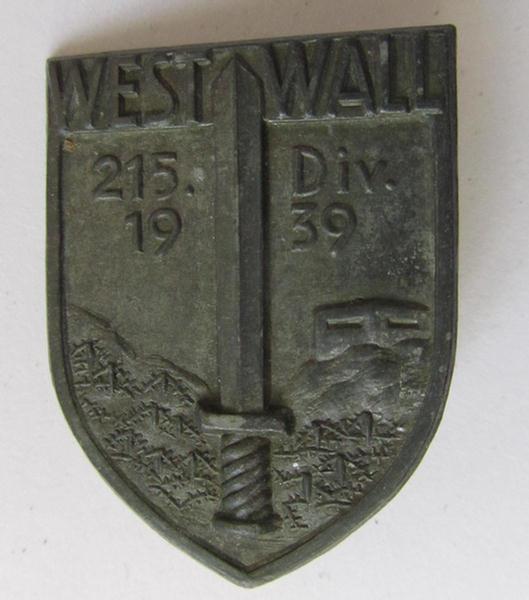 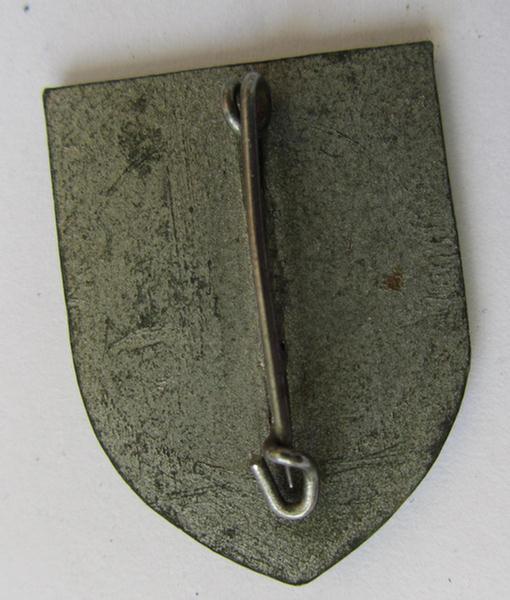 This is a very nice (and fairly rarely encountered!) so-called: Truppentraditionsabzeichen des 215. Infanteriedivision executed in silvered 'Feinzink', in nice, albeit minimal used and/or worn condition. This rare Traditionsabzeichen (or 'Plakette' as officially known) is executed in zinc (ie. Feinzink) and comes complete with its original pin-/catch attachement. The badge - sized: 3,5 x 2,5 cms. - depicts a sword with a bunker in the background and shows the text: 'Westwall - 215. Div. - 1939'. The badge on offer here has never been cleaned nor polished and shows truly great and/or pronounced detail. (The badge is also pictured in the Heering-Hüsken Abzeichenkatalog, wherin it is given the number 9817A and an estimated price of 225 Eu!). As possiblly known were these (semi-official!) badges also properly entered in both Wehrpass and/or 'Soldbuch': they also were handed-out with an official award-document (!). Some time ago I have sold a complete grouping (with all papers) which can be still looked-up in my 'archive-section' if deemed of interest. Simply a very nice 'Infanterie-related: Truppentraditionsabzeichen: only the fifth such neat and rare Heeres-badge I ever had on offer!