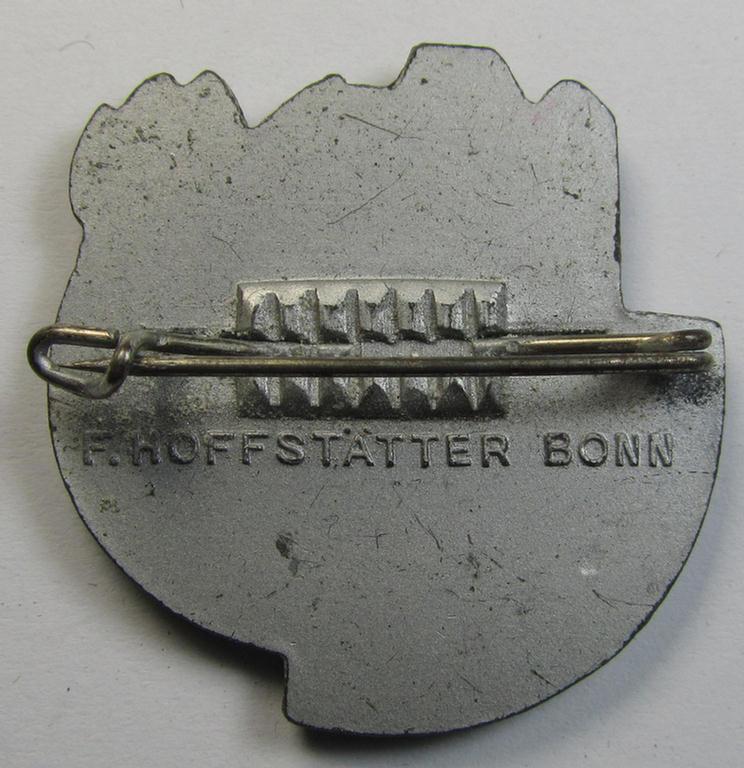 This a very attractive - and with certainty not that often encountered! - DJH- (ie. 'Deutsche Jugend Herberge') an/or: HJ- (ie. 'Hitlerjugend'-) related day-badge (ie. 'tinnie' or: 'Veranstaltungsabzeichen') that was specifically issued to commemorate a specific DJH- (ie. HJ-) related complex named the: 'Jugendburg Monschau' being a clearly maker- (ie. 'F. Hoffstätter - Bonn') marked example that comes in an overall very nice- (albeit moderately used- ie. worn-), condition. The very detailed and/or pronounced badge - which is executed in typical, greyish-toned- and zinc-based metal (I deem so-called: zinc- ie. pot-metal) - truly shows nice detail and was almost certainly never cleaned nor polished: it is just somewhat tarnished by age (as can be seen on the pictures). The somewhat smaller-sized piece (which is as stated above nicely maker-marked on its back) depicts a detailed illustration of the 'Jugendburg Monschau', a: 'HJ-Raute' and 'DJH'-logo coupled with the above-mentioned text and comes mounted onto its (of course still functional) pin-/catch set-up (as can be seen on the pictures). Simply a very nice - and most certainly scarcely encountered! - HJ- (ie. 'Hitlerjugend'-) related 'tinnie'. I deem that I have priced this attractive example according to its desirability and/or truly nicely preserved- and/or fully untouched condition!