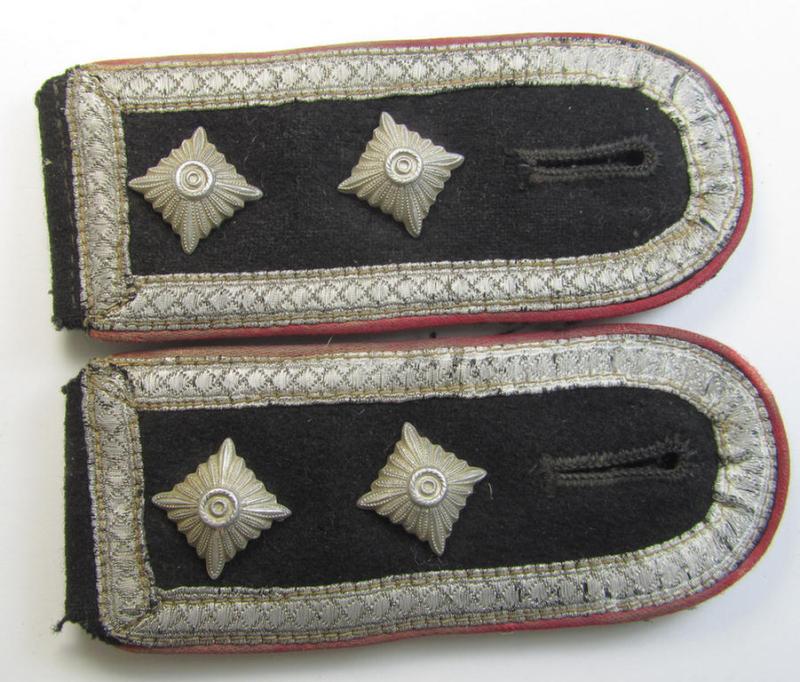 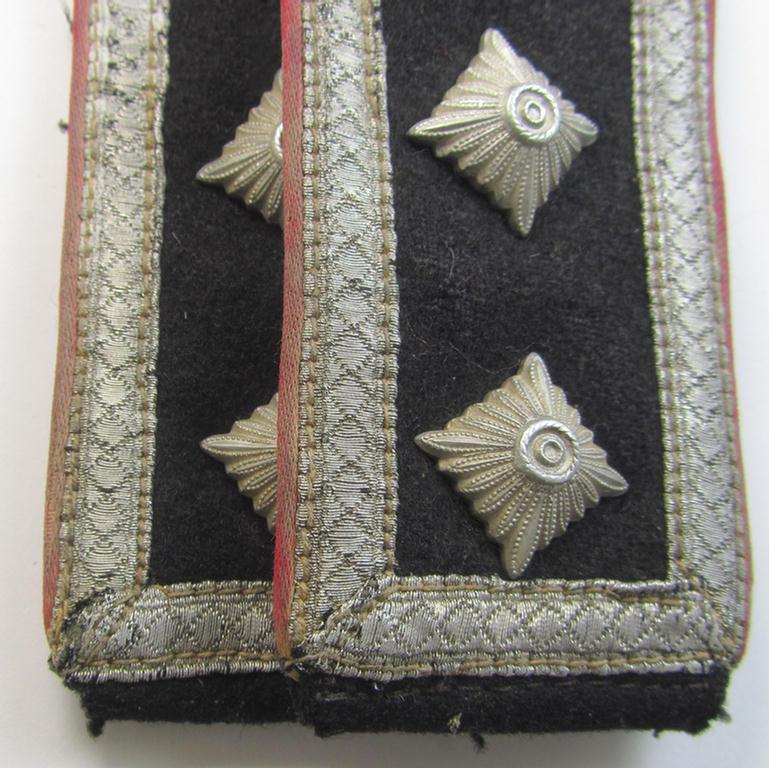 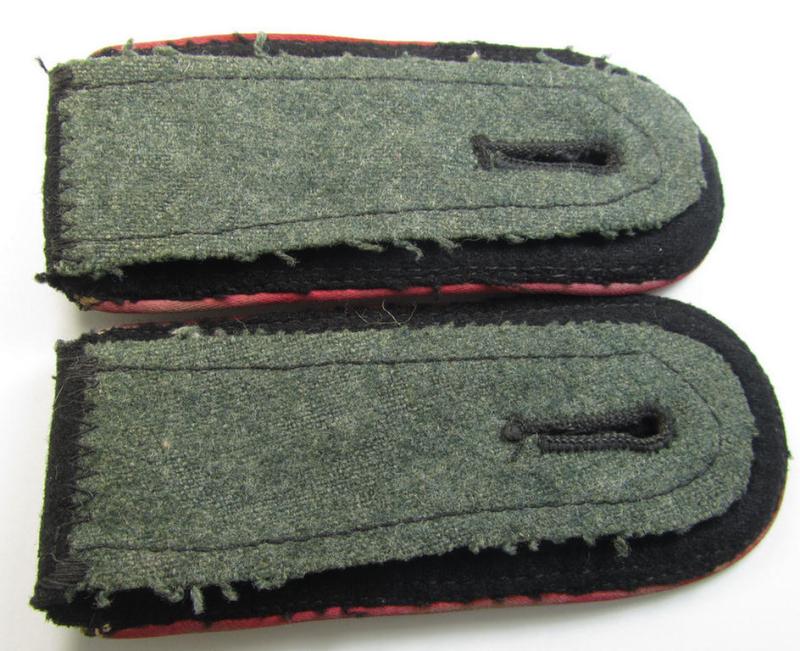 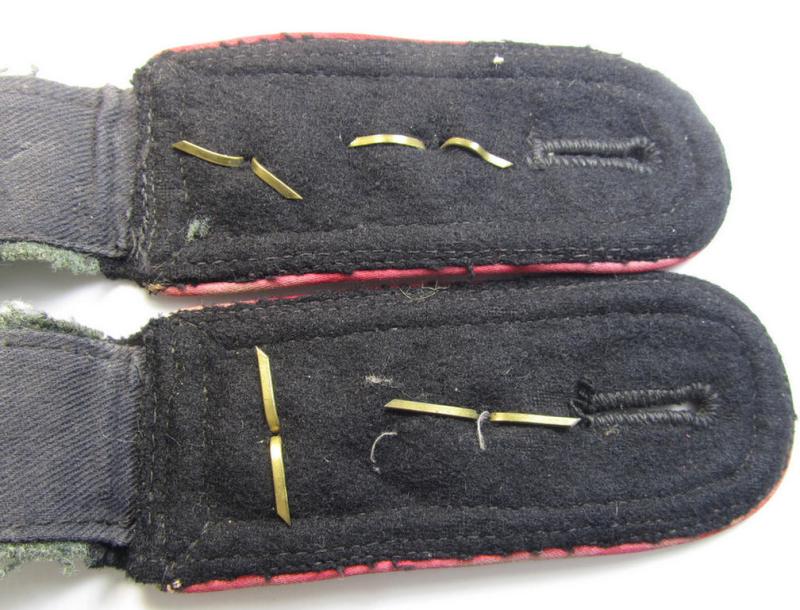 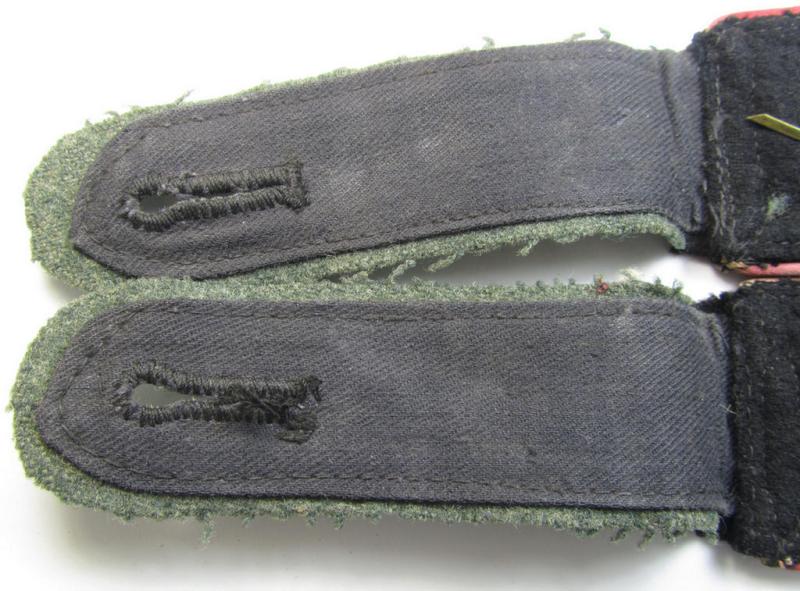 Superb - and fully matching! - pair of WH (Heeres) 'Panzer' NCO-type shoulderstraps (as was specifically used on the black-coloured 'wrap-around'-tunics) as was intended for usage by an: 'Oberfeldwebel eines Panzer-Regiments'

This is a truly very attractive - fully matching and nowadays actually rarely offered for sale! - pair of WH (Heeres) - I deem - quite early-war-period, NCO-type shoulderstraps (as was specifically produced for - and used onto! - the black-coloured, Panzer-'wrap-around'-tunics) as was intended for usage by an: 'Oberfeldwebel eines Panzer-Regiments' (or: NCO and sergeant first-class and tank-crew-member who served within a 'Panzer'-unit- ie. regiment) and that comes in an overall very nice- (albeit moderately used ie. worn-), condition. The neat straps - which have the 'standard'-pattern, black-coloured- and/or: woolen-based 'upperdecks' - measure approximately 11,4 cms. in length each and have the desirable, bright-pink- (ie. 'rosaroter'-) coloured- and/or: 'silk-like'-type piping attached (as can be seen on the pictures). Next to this they show the silverish-grey-toned NCO-braid and have both a pair of (matching and aluminium-based) pips attached. The neat straps come naturally mounted onto their functional tongues and do both show some minimal wear, usage and/or moderate age (as can be seen on the pictures). This attractive pair was recently found at a German private-household and was never before in collectors'-hands: it was worn by a 'Panzer'-NCO who kept and stored these insignia for decades. Simply a very attractive, original and/or fully matching, early-war-period NCO-type 'Panzer'-shoulderstrap-pair that can easily be graded 'rare' and that is nowadays almost impossible to encounter!