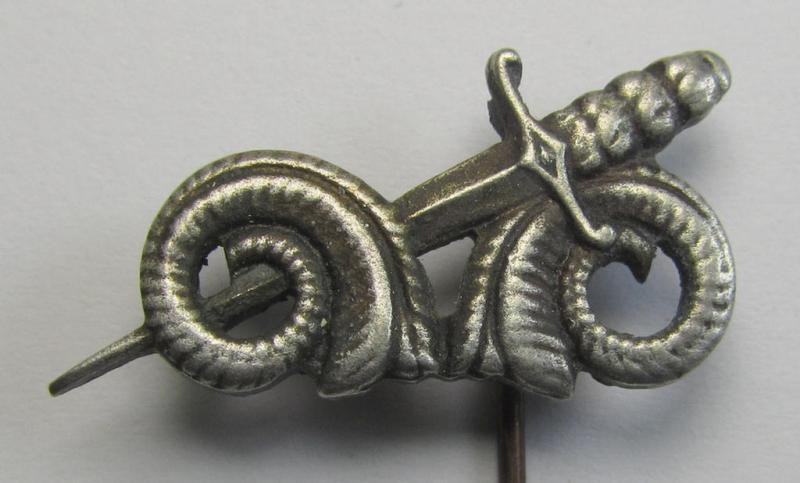 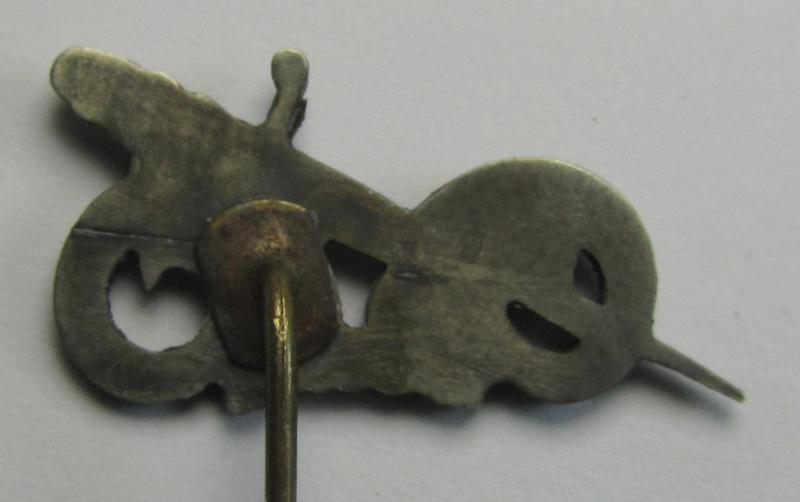 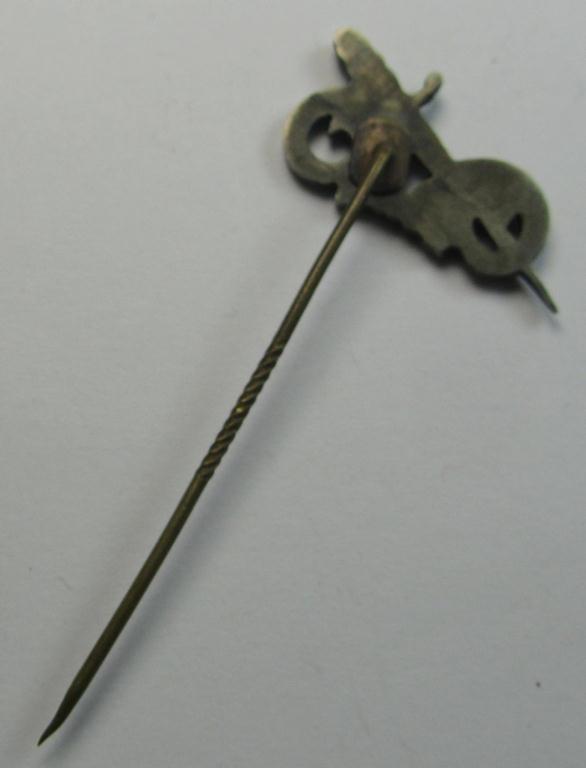 This is a neat - and with certainty rarely seen! - silverish-toned- and/or typical 'Buntmetall'-based! - Dutch facist-party-related membership-badge (or in Dutch language: 'Ledendraagteken') as was specifically intended for members serving within the party named: 'Zwart ie. Nationaal Front' (being a nicely preserved and non-maker-marked example) that comes in an overall nice (albeit moderarely used- and/or worn-), condition. The smaller-sized lapel-pin - having an approximate width of only 2,8 cms. and featuring a sword between a pair of ram-horns - is a non-maker-marked example that comes mounted onto its original (and/or long-sized) pin. The 'Zwart Front' (which can be translated as Black Front) was a Dutch greater Netherlandic and fascist-movement active before and during the Second World War. The 'Zwart Front' grew out of the southern section of the General Dutch Fascist League, with regional organiser Arnold Meijer quarrelling with leader Jan Baars and leading his followers out in 1934. The 'Zwart Front' emerged and soon took over a number of smaller movements, while also gaining some support among the poorer parts of society. Although similar to its parent movement, the 'Zwart Front' emphasised a more Catholic line in tune with Meijer's own religious beliefs. Taking its cue in part from Italian fascism, it adopted that movement's black-shirted uniform while adding a unique emblem featuring a sword between a pair of ram-horns. However, the group struggled to gain support from the National Socialist movement in the Netherlands (ie. the NSB); it was renamed: 'Nationaal Front' in 1940. The 'Nationaal Front' was ultimately banned by the Germans on 14 December 1941, along with all other Dutch political parties except for the NSB. The majority of its members switched to the NSB, although Meijer, disillusioned, left politics altogether. The piece on offer here shows a fully undamaged surface (the pin has I deem never been cleaned nor polished). This badge originates from an older Dutch collector who collected these for various decades. Simply a very nice example of this scarcely encountered 'Zwart ie. Nationaal Front'-related membership-badge: hard to find a nicer and more reasonably priced example!