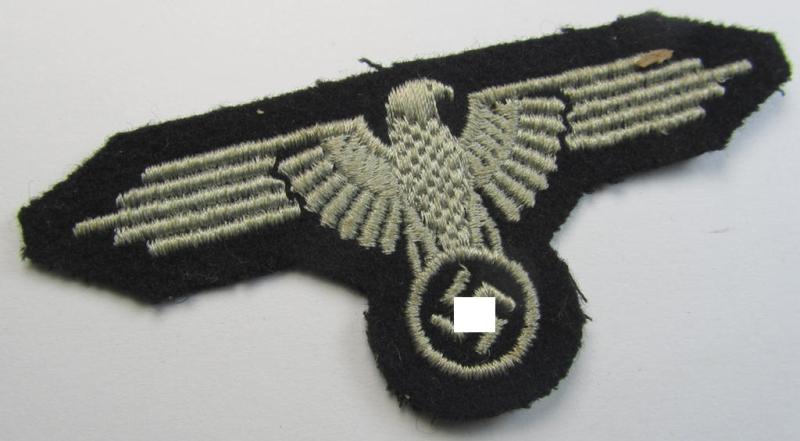 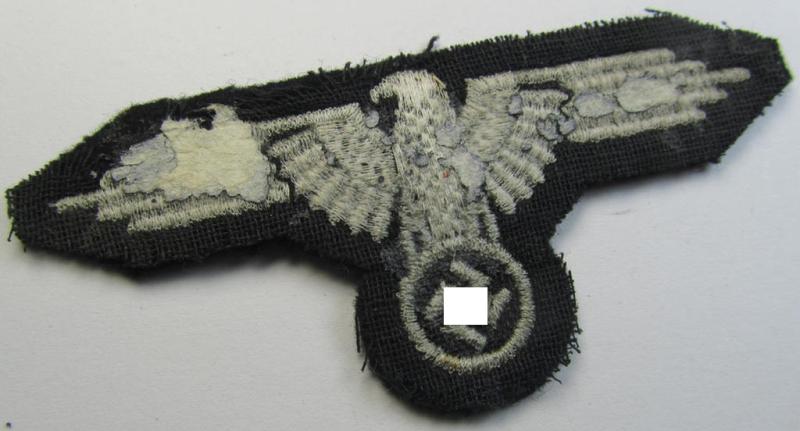 Attractive example of a mid- (ie. later-war-) pattern, 'SS' (ie. 'Waffen-SS') so-called: 'RzM-style' enlisted-mens'-/ie. NCO-pattern arm-eagle as was intended for usage by the various Waffen-SS troops throughout the war

This is a very attractive - and (I deem) moderately worn and once tunic-attached! - example of a mid- (ie. later-war-) pattern, 'SS' (ie. 'Waffen-SS') so-called: 'RzM-style' enlisted-mens'-/ie. NCO-pattern arm-eagle (ie. 'Ärmeladler für Mannschaften u. Unteroffiziere') as was intended for usage by the various Waffen-SS troops throughout the war and that comes in an overall very nice- (and as stated above used- and/or carefully tunic-removed-), condition. The neat and desirable piece - which shows the machine-embroidered- and/or silverish-white-coloured stitching on a typical, black-coloured and woolen background - comes in a wonderful condition and is just a tiny bit stained caused by fair wear storage and/or handling over the years (as can be seen on the pictures). The eagle - which is not 'backed' and that is machine-embroidered on typical, black-coloured wool - is a text-book example of a so-called: 'RzM'-pattern, arm-eagle. The piece - that just shows some minimal fraying on the sides as more often - shows some minimal staining caused by decades of storage and fair wear: it has once been glued in an album or scrapbook once (and does show some minimal carton-remains on its back). Simply a very attractive - and of course 100% guaranteed original! - Waffen-SS arm-eagle that will be very hard to be upgraded and that is nowadays getting impossible to find!