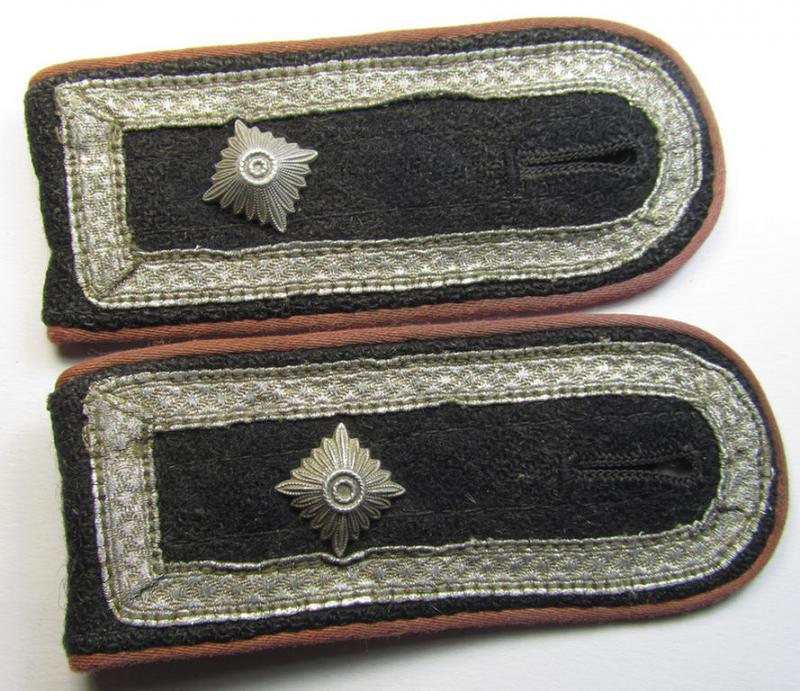 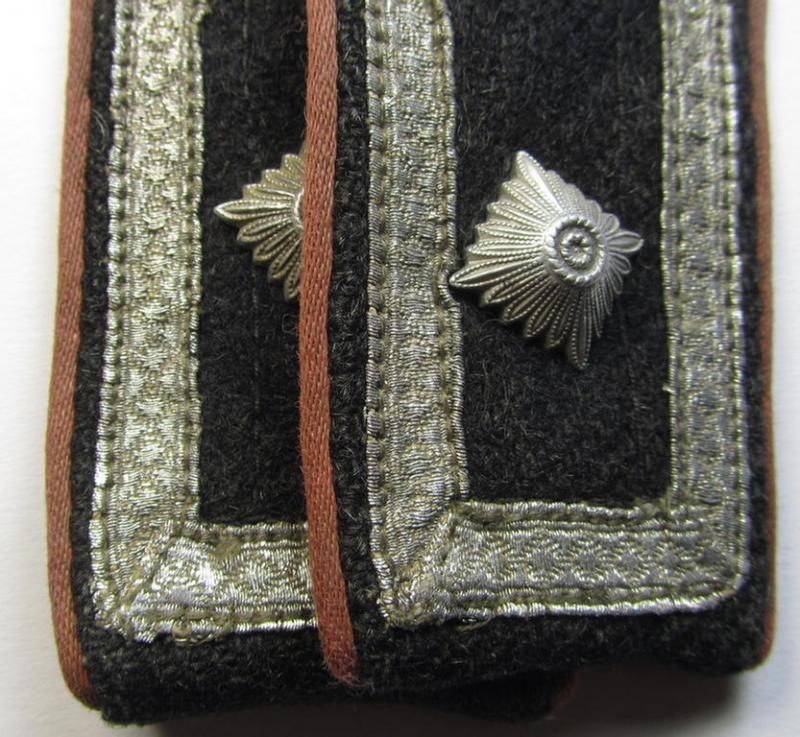 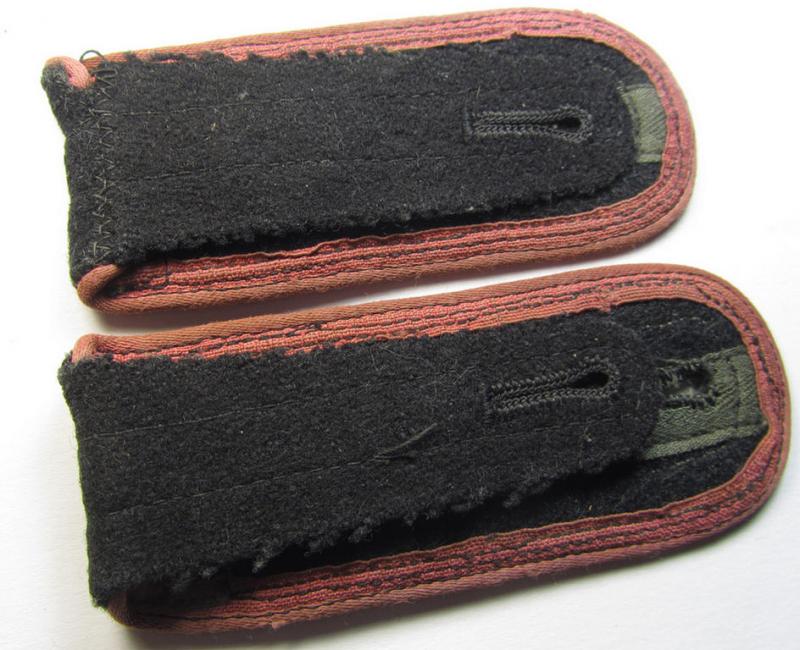 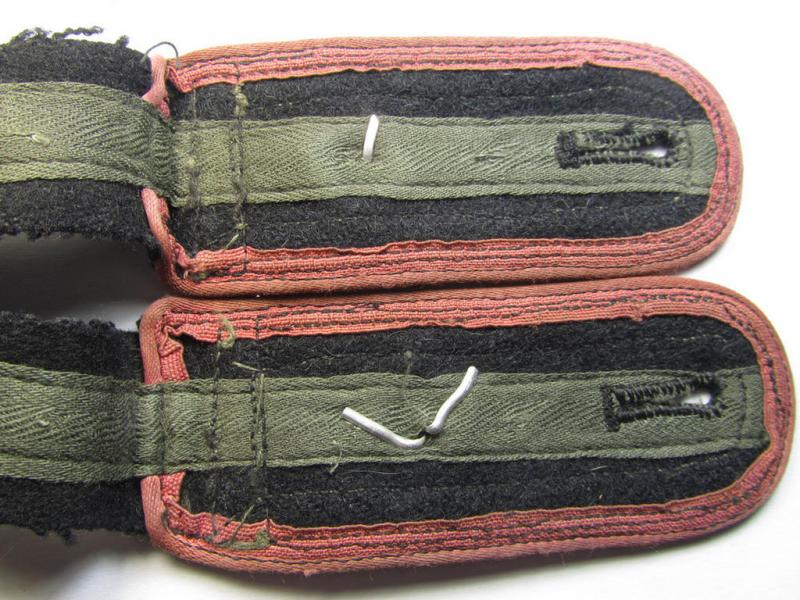 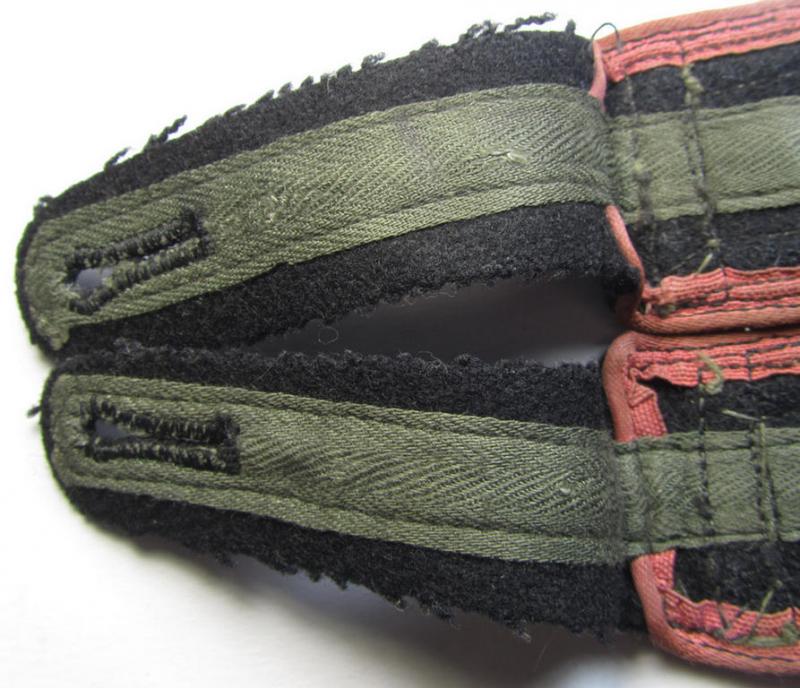 Superb - and fully matching! - pair of WH (Heeres) later-war-period, 'simplified' NCO-type shoulderstraps (as was specifically used on the black-coloured 'wrap-around'-tunics) as was intended for usage by an: 'Uffz. der Panzer-Truppen'

This is a truly very attractive - fully matching and with certainly rarely found! - pair of WH (Heeres) later-war-period- and typically 'simplified', NCO-type shoulderstraps (as was specifically produced for - and clearly used on - the black-coloured Panzer 'wrap-around'-tunics) as was intended for usage by an: 'Unteroffizier der Panzer-Truppen' (or: junior-sergeant and tank-crew-member) and that comes in an overall very nice- (albeit moderately used ie. worn-), condition. The neat straps - which have the 'standard-type', black-coloured- and/or: woolen-based 'upperdecks' - measure approximately 10,5 cms. in length each and show the desirable, bright-pink- (ie. 'rosaroter'-) coloured- and/or: desirable 'silk-like'-type piping attached. Moreover, do they show the (silver-toned) NCO-braid and two (matching, regular-sized- and/or aluminium-based) pips attached denoting the NCOs-rank of an: 'Unteroffizier' (as can be seen on the pictures). The neat and fully 'text-book' straps comes naturally mounted onto their functional - and scarcely seen! - so-called: 'simplified' tongues and do show some obvious wear, usage and/or moderate age (as can be seen on the pictures). Simply a very attractive - and with certainty rarely found! - pair of NCO-pattern, 'Panzer'-shoulderstraps that was worn - and clearly used by! - an: 'Unteroffizier der Panzer-Truppen': just the first such rare pair I ever had on offer!