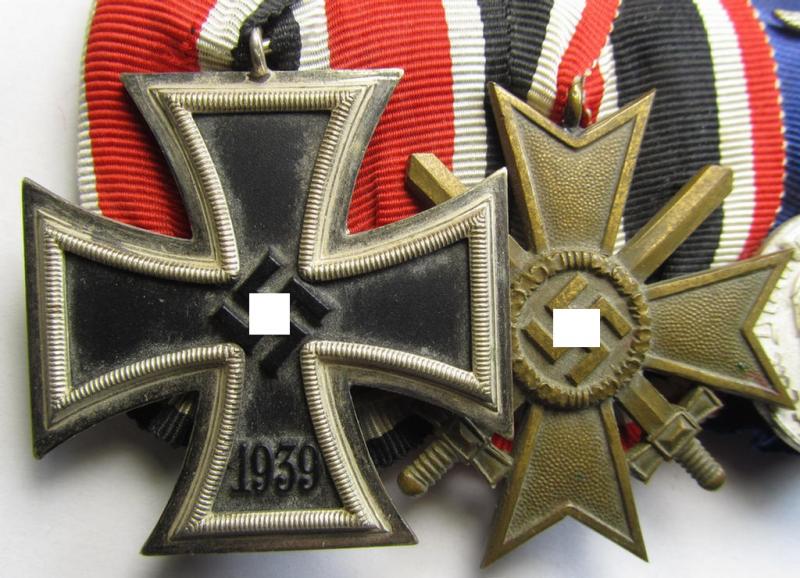 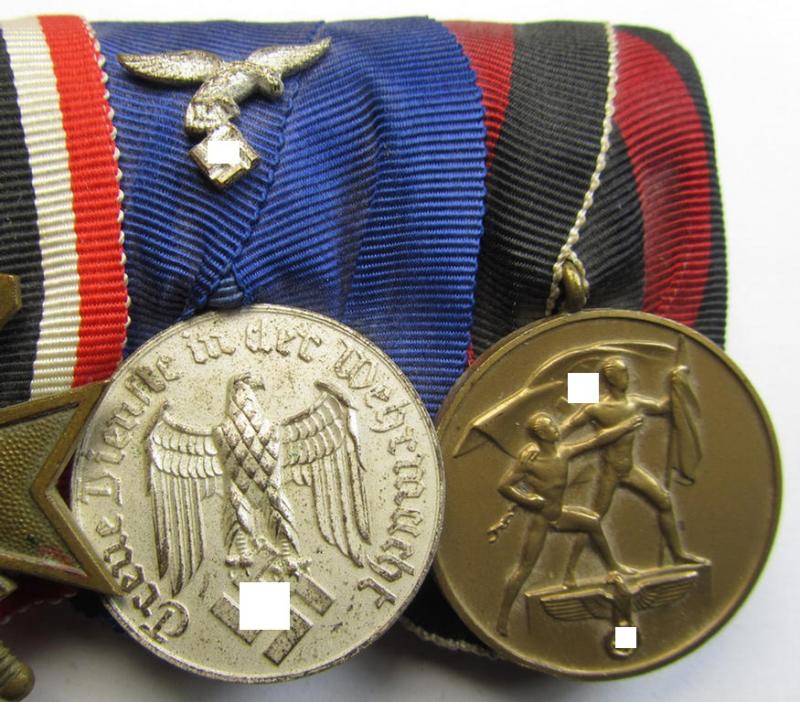 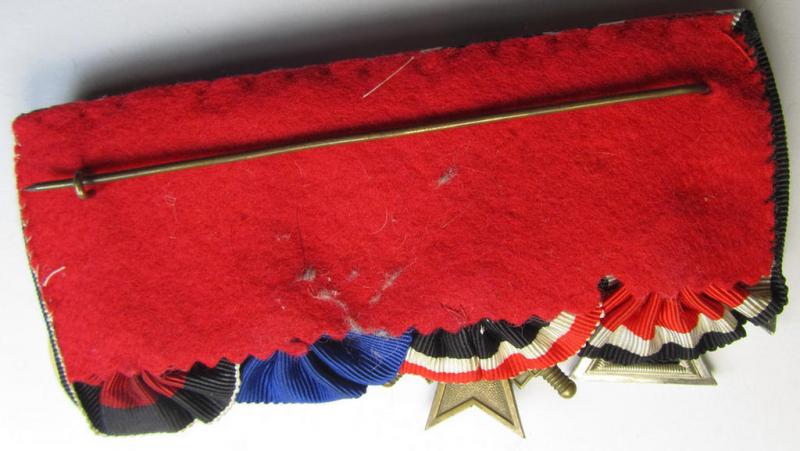 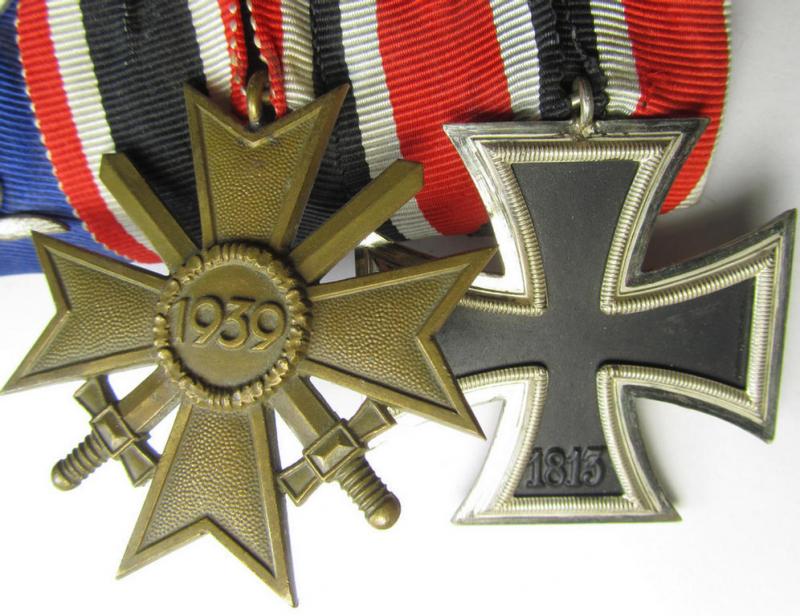 The truly attractive, four-pieced (WWII- ie. TR-period, WH (Luftwaffe) related medal-bar (ie. 'Ordenspange') shows respectively an: 'Eisernes Kreuz II. Klasse' (or: iron-cross second class), a: 'Kriegsverdienstkreuz der II. Klasse mit Schwertern' (or: war merits'-cross second class with swords), a: 'WH (Luftwaffe) Dienstauszeichnung 4. Stufe für 4 Jahre treue Dienste' (or: loyal-service medal for 4 years of loyal service) that comes with a detailed, bright-silver-coloured LW-eagle-device firml- attached and a: WH Czech 'Anschluss'- (ie. occupation-) medal: '1 October 1938' (as was given to all members of the armed forces that participated in the German occupation of Czecoslovakia, which started on 1 October 1938), all four awards coming in an overall very nice- (and - I deem - only minimallly used- and/or worn-), condition. All four awards are truly nicely preserved examples that seem to have never been cleaned nor polished: they come in an equally minimally tarnished- ie. dusty (ie. used) condition and come naturally mounted on their period ribbons. The iron cross - which is an attractive example that was produced by a - by me - unidentified maker - was with certainty never cleaned and has a very nice and/or attractive age-patina: it truly retains most of its so-called: 'hochpolierte Kanten' (or: polished sides) and has a minimally tarnished appearance (as can be seen on the pictures). The cross retains truly very nice and/or pronounced detail and has a nicely preserved, black-finished (ie. somewhat 'matted'- ie. satin-like) core: it is totally void of any paint-damage or alike. The 'Kriegsverdienstkreuz der II. Klasse mit Schwertern' is a neat golden-bronze-toned- and/or typical 'Buntmetall'-based example that is equally nicely preserved. The (Luftwaffe-related) loyal-service medal is truly a very nicely preserved example that seem to have never been cleaned nor polished: it comes in a minimally tarnished- ie. dusty condition and comes mounted onto its period ribbon that shows a neat (silvered) LW-eagle-device period-attached. The Czech 'Anschluss'-medal is truly golden-bronze-coloured and is just minimally tarnished by age and/or moderate usage and wear: it is, however, totally void of any damage or alike (as can be seen on the pictures). I could not check if the IC is marked in its ring: the ring is firmly obscured by its ribbon). The entire 'Spange' (which is of the 'non-detachable-pattern') comes naturally mounted onto its functional pin- ie. catch set-up and is nicely 'backed' with a piece of bright-red-coloured wool as is more often seen (as can be seen on the pictures). This medal-bar was recently found at a private-household in Germany and was never before part of a collection. The 'Spange' is most certainly a period-compiled- and/or worn piece and is NOT a post-war compilation or alike and was kept as such for decades. Simply an attractive - and truly decorative! - four-pieced medal-bar that is not that easily found and that is most certainly accordingly priced!