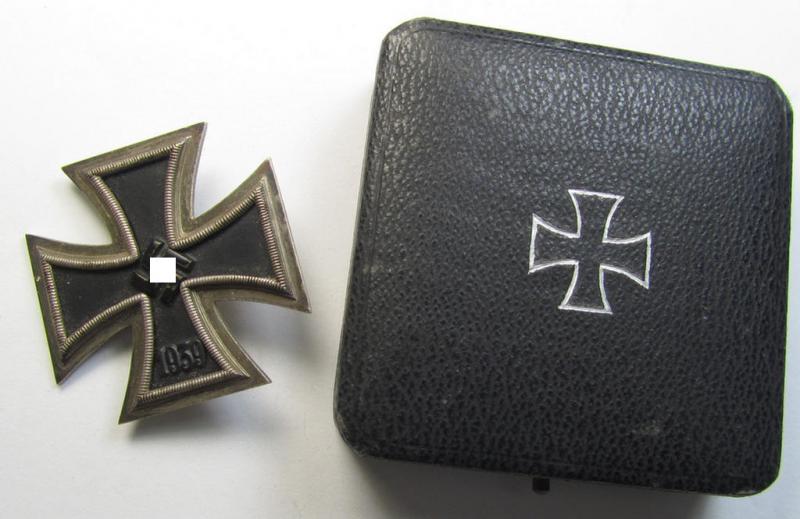 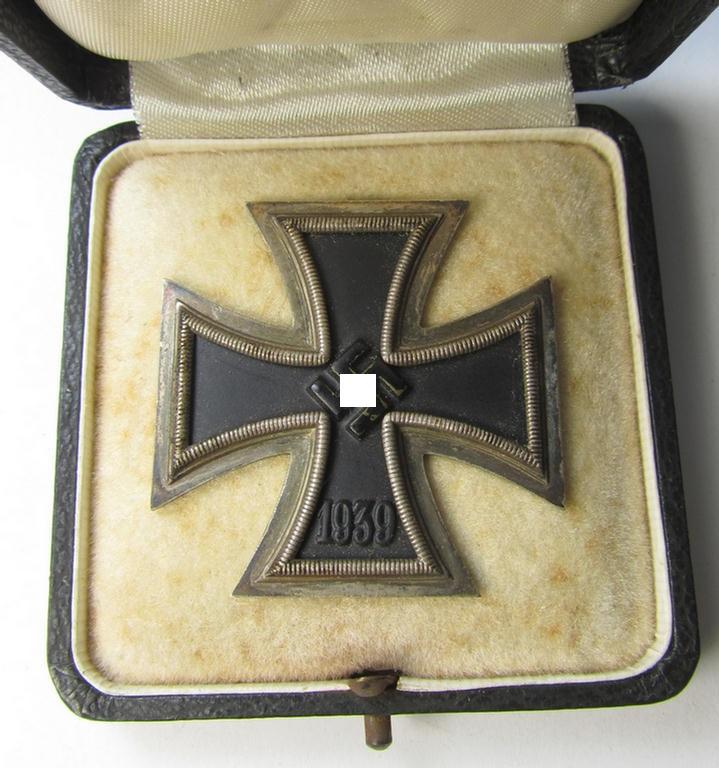 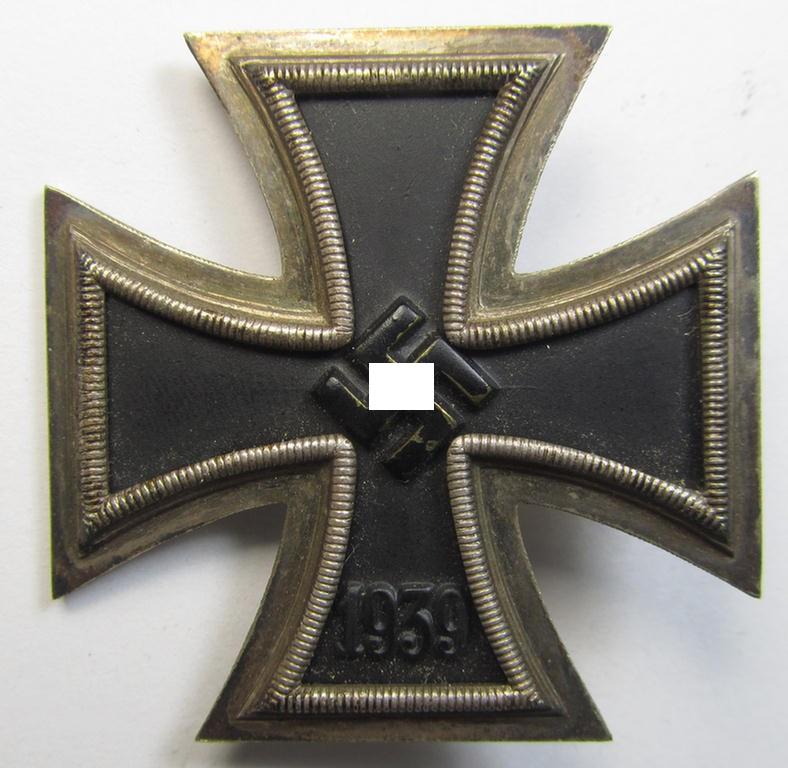 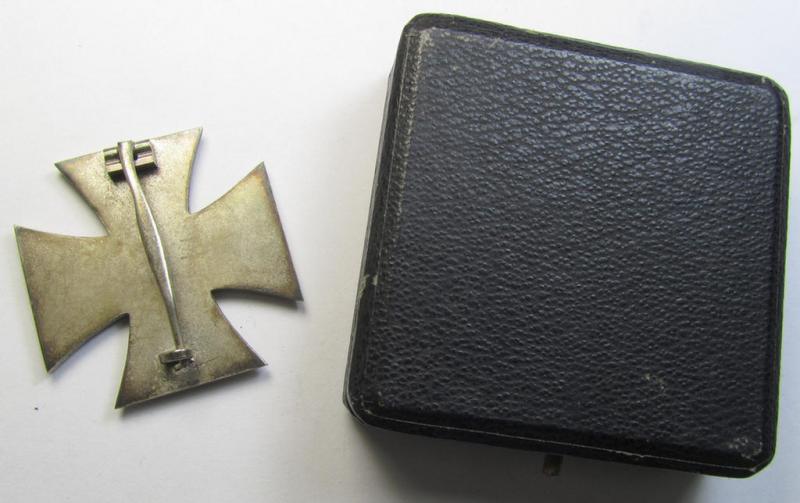 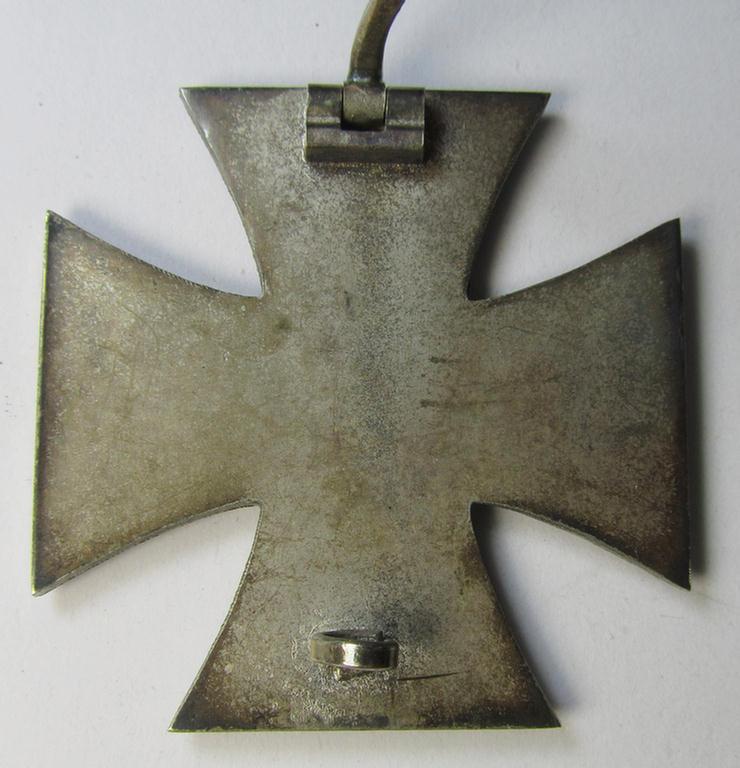 Superb - and early-period! - 'Eisernes Kreuz 1. Klasse' (or: Iron Cross 1st class) being a non-maker-marked example as was presumably produced by the maker: 'B.H. Mayer's Kunstprägeanstalt' and that comes stored in its early-pattern etui

This is a truly very attractive - and I deem early-war-period- and/or only moderately worn- ie. used - example of an: 'Eisernes Kreuz 1. Klasse' (or: Iron Cross 1st class) being a very attractive albeit non-maker-marked example as was (I deem) produced by the desirable maker (ie. 'Hersteller'): 'B.H. Mayer's Kunstprägeanstalt' and that comes stored in its typical (also early-period and luxuriously-styled) etui as issued and that comes in an overall very nice- (ie. surely issued and only moderately worn-), condition. The typical, non-magnetic(!) cross has a very attractive age-patina and retains truly great detail: the black-coloured core shows no rust nor real damage whatsoever: the (somewhat 'matted'- ie. satin-like-) black-painted core is nicely preserved without showing any real damage: just some minimal paint-loss is visible within the swastika-area (as can be seen in the pictures). The piece has lost most of its so-called: 'hochpolierte Kanten' (as can be seen on the pictures). The (flute-shaped) pin and catch (ie. set-up) are naturally unaltered and/or fully functional. The cross - which is a non-vaulted ie. non-converse-shaped example as more often - is as stated above - I deem - an early war-period example that was produced by the desirable maker: 'B.H. Mayer's Kunstprägeanstalt' (ie. 'Hersteller 16 o. L/18') as was based in the town of Pforzheim. The piece came stored in its typical (also early-period!) etui as issued and/or stored for decades: also, this etui comes in an overall very nice condition and shows a white-beige-coloured- and/or velvet-based inner-section and fully preserved silver-coloured IC-symbol on its top. Simply an attractive - and with certainty scarcely seen! - matching, IC first-class-set that was never before in any collection and that is with certainty accordingly priced!